The AECB Milton Keynes group joined up with members of the local London group for their August event, a walking tour of the Queen Elizabeth Olympic Park.  Led by Phil Askew, currently the Queen Elizabeth Olympic Park Project Leader for Landscape and Urban Design with the London Legacy Development Corporation and previously the Olympic Delivery Authority,  Phil was the perfect person to share the story of the parks transformation from its toxic past to the vibrant, diverse hub it is today.

During the two hour tour the groups explored both vibrant, busy and quiet, relaxing areas of the park. The level of detail and thought into each aspect of the park was striking, for example the banking of a temporary bridge which had been turned into a climbing wall. Phil put the success of the project down to a detailed brief with the right experts on board from the beginning. More details can be found here. 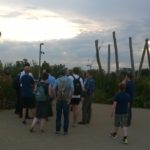 It was beneficial having members from the two groups attending the event together as the usual group dynamics were mixed resulting in some stimulating discussions. Interesting suggestions were also shared for future visits.

The next event for the Milton Keynes group is a site visit to the Carrstone Passivhaus Plus build on 21st September.  More details to follow.