At the beginning of the month our three counties group visited ‘Cobtun’ – the Worcester home of two regular group attendees. The house has won several awards including the RIBA Sustainability Award and is in a conservation area, overlooking the River Severn.  Built in 2001/03, it is made from local oak and glass with a wall of red earth and was originally made for a retired barrister and his wife who was wheel chair bound so it is a bungalow.

The current owners, Bill and Rosemary bought it in 2006 and kindly showed the group around.  Bill explained that the feature red cob wall was intended to be built from earth excavated from the site but this was found unsuitable so soil had to be imported.  Cladding of the cellulose-insulated block walls was Forest of Dean oak.  Energy conservation measures include solar panels, rainwater reclamation and a passive solar strategy with vines giving limited seasonal shading.

Being a particularly warm July evening, discussion inevitably focussed on the obvious overheating problems caused by sound and west facing glazed facades.  This had been mitigated by external shading that Bill and Rosemary had installed using rush blinds and Ikea sails. 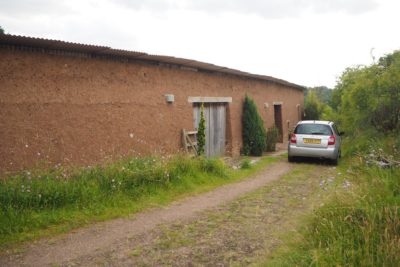 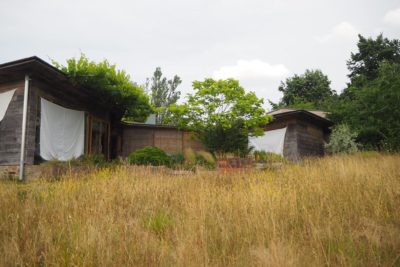