Congratuations to AECB members, ARCO2 who were announced as the winner for the Best Contribution to the Built Environment: New Build at the Cornwall Sustainability Awards ceremony held in Newquay at the beginning of December. 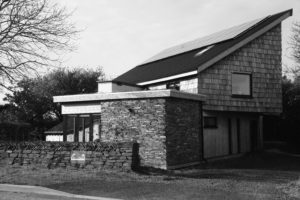 The project winner was ARCO2’s Director Ian Armstrong’s own self build – Velidhu.  The award category was for a project demonstrating the best of Cornish Sustainable buildings.  Velidhu is a self-build, highly efficient property with the highest Standard Assessment Procedure (SAP) rating in Cornwall and generates more income than the cost of energy it uses.  The building is super insulated, the fabric is airtight, breathable and the external joinery all triple glazed.  It was built using sustainable materials such as natural stone untreated timber and sheep’s wool insulation.

ARCO2 were also announced as Highly Commended in Best Managed Large Business for continually demonstrating their commitment to sustainability issues.