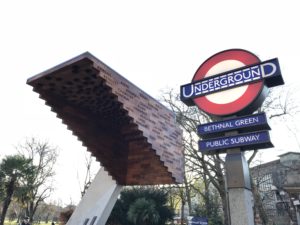 Sadiq Khan and attended by politicians, trustees, relatives and survivors.

This project for a new public space commemorates the worst civilian disaster of World War II, when 173 men, women and children died on the staircase leading down to the tube station. The hollowed out stair powerfully evokes the volume of space in which people died and the ceiling of the stair canopy has 173 holes in it to represent, in light, each of the victims.

You can follow Harry on twitter @harrypaticas to hear more about this beautiful memorial and read more on the background here: http://arborealarchitecture.com/projects/bethnal-green-memorial