Article taken from his blog ‘Only Eleven Percent’

At the recent EU Sustainable Energy Week, Vice-President Maroš Šefčovič said “we should treat energy efficiency as an energy resource in its own right” and in fact the Commission now talks about energy efficiency first. Efficiency enthusiasts have long advocated this view so it is good to see it beginning to be adopted by the EC.

If efficiency is to be treated as a resource we need to map the language of efficiency onto the language of other energy resources. The energy and finance industry has its own language when taking about resources, a language that is itself often mis-understood by outsiders. In the 1970s there were many reports of oil running out based on the fact that there were only 20 (or 30 or some other number) of years of oil reserves left. This completely mis-understood the meaning of reserves.   So let’s look at the language of conventional fossil fuel energy resources and how that maps onto energy efficiency.

The methodology for defining and measuring resources and reserves is called the Petroleum Resources Management System (PRMS) and has been developed by the Society of Petroleum Engineers and endorsed by the World Petroleum Council, the American Association of Petroleum Geologists, the Society of Petroleum Engineers and the Society of Exploration Geophysicists. The valuation of oil and gas companies are based on the use of the PRMS and when oil and gas companies come to the public markets the price is related to the PRMS assessment as it provides a standardized way of assessing, and therefore valuing, resources and reserves.

The diagram and the text below explains the PRMS and the definitions.

RESERVES are those quantities of petroleum anticipated to be commercially recoverable by application of development projects to known accumulations from a given date forward under defined conditions. Reserves must further satisfy four criteria; they must be discovered, recoverable, commercial, and remaining (as of the evaluation date) based on the development project(s) applied. Reserves are further categorized in accordance with the level of certainty associated with the estimates and may be sub-classified based on project maturity and/or characterized by development and production status.

CONTINGENT RESOURCES are those quantities of petroleum estimated, as of a given date, to be potentially recoverable from known accumulations, but the applied project(s) are not yet considered mature enough for commercial development due to one or more contingencies. Contingent Resources may include, for example, projects for which there are currently no viable markets, or where commercial recovery is dependent on technology under development, or where evaluation of the accumulation is insufficient to clearly assess commerciality. Resources are further categorized in accordance with the level of certainty associated with the estimates and may be sub-classified based on project maturity and/or characterized by their economic status. Note that for resources to be classified as Contingent Resources they must be discovered. 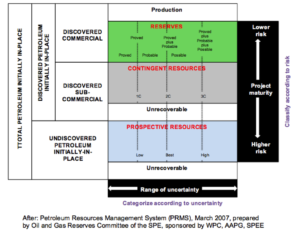 UNDISCOVERED PETROLEUM INITIALLY-IN-PLACE is that quantity of petroleum estimated, as of a given date, to be contained within accumulations yet to be discovered.

PROSPECTIVE RESOURCES are those quantities of petroleum estimated, as of a given date, to be potentially recoverable from undiscovered accumulations by application of future development projects. Prospective resources have both an associated chance of discovery and a chance of development. Prospective resources are further subdivided in accordance with the level of certainty associated with recoverable estimates assuming their discovery and development and may be sub-classified based on project maturity. Prospective Resources can be sub-classified as Prospects, Leads and Plays as follows:

UNRECOVERABLE is that portion of Discovered or Undiscovered Petroleum Initially-in-Place quantities which is estimated, as of a given date, not to be recoverable by future development projects. A portion of these quantities may become recoverable in the future as commercial circumstances change or technological developments occur; the remaining portion may never be recovered due to physical/chemical constraints represented by subsurface interaction of fluids and reservoir rocks.

Discovered recoverable volumes (Contingent Resources) may be considered commercially producible, and thus Reserves, if the entity claiming commerciality has demonstrated firm intention to proceed with development and such intention is based upon all of the following criteria:

To be included in the Reserves class, a project must be sufficiently defined to establish its commercial viability. There must be a reasonable expectation that all required internal and external approvals will be forthcoming, and there is evidence of firm intention to proceed with development within a reasonable timeframe. While 5 years is recommended as a benchmark, a longer time frame could be applied where, for example, development of economic projects are deferred at the option of the producer for, among other things, market-related reasons, or to meet contractual or strategic objectives. In all cases the justification for classification as Reserves should be clearly documents.

So, having explained the PRMS, what are the equivalents in energy efficiency and how do we need to change the language so that we can think of efficiency as a resource?

Clearly assets in Production are efficiency projects that have been implemented and working. Like oil fields actual production (of “negawatt hours”) will vary from the initial design estimates, this variation can be down to errors of designs (technical performance) and variations in other factors e.g. occupancy patterns in a building. The economic performance will of course be affected by the price of energy that is being “saved” which will almost certainly vary during the project lifetime, just like the price of oil varies during the production lifetime of an oil field. In both cases the only certainty is that the actual output and actual economic performance will be different to that estimated in the investment case.

Energy efficiency reserves, using the PRMS criteria of being discovered, recoverable, commercial and remaining, are those projects that have been identified in some process (probably involving an energy audit), can be implemented practically, are commercial according to the investor’s criteria and are as yet not implemented. The level of uncertainty addressed in the PRMS fits nicely with the difference between a regular energy audit or survey and an Investment Grade Audit (IGA). IGAs typically include fixed prices and a financing plan. (An IGA can be level II or III in ASHRAE or Type 3 under ISO50002.)

Also of course an audit of either type, a simple audit or an IGA, can find projects that are sub-commercial i.e. Contingent Resources. One of the definitions of sub-commercial is projects for which there are “currently no viable markets” – there actually isn’t a market for energy efficiency although we can envisage a situation where there could be, similar to the market for demand response. Creating such a market would require the appropriate regulatory framework. The other criteria is “where commercial recovery is dependent on technology under development”, in energy efficiency there are projects that are dependent on emerging technology and assumptions about its timing and/or costs and benefits. The third criteria is “where evaluation of the accumulation is insufficient to clearly assess commerciality”, i.e. the level of uncertainty is too high due to a lack of information. This may be a project identified by an audit but where there is still uncertainty over costs and savings, uncertainty that can be reduced by further measurement and analysis or cost determination, or external, contextual uncertainties e.g. uncertainty about the future ownership or occupancy of a building.

Over the last forty years there have been numerous studies of the potential for energy efficiency. One problem with these studies is the definition of economic, what is economic is defined by the investor and will vary from investor to investor. They also often cover the equivalent of Reserves, Contingent Resources, Undiscovered, Prospective Resources and Unrecoverable without breaking the potential down. The size of the Unrecoverable energy efficiency is driven by the technological frontiers with the upper limit set by the laws of thermodynamics.

It is often said that one of the problems with energy efficiency is that it is invisible. This is true, but let’s not forget that oil and gas resources and reserves are also invisible, it is only the tools of geology and seismic studies – which are increasingly sophisticated – which allows us to “see” those resources. In energy efficiency it is tools like benchmarking and energy audits that allow us to see the resource. 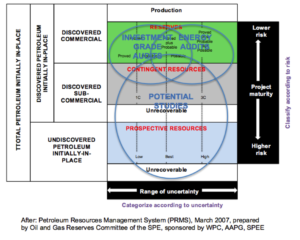 One of the differences between energy supplies and energy efficiency is that once the reserves are identified they don’t usually sit around for many years without being developed. Compared to oil and gas the reserves are made up of many (millions of) individual small projects and implementation usually follows evaluation fairly quickly, unlike in oil and gas where projects can cost billions and take many years. On the other hand we know that there have been years of energy audits which identified economic projects which have not been implemented – energy audits are notorious for sitting on the book shelf (or these days on the hard drive). The projects identified in those audits are effectively energy reserves and contingent resources which are not valued. They have a high degree of uncertainty but they are there.

If you are an oil and gas company with control over reserves and even resources, these have a value against which you can raise money. This is how oil and gas E&P (exploration and production) companies raise money on markets like AiM (Alternative Investment Market) or TSX (Toronto Stock Exchange).   Given that nearly every building has reserves of energy efficiency potential we need to think about mechanisms that value that potential, just like we value oil and gas fields before they are exploited.

The built environment is probably our biggest energy resource.

I’m working on several energy efficiency financing projects around the world including the Investor Confidence ProjectEurope and I provide strategic and financing advice to energy and clean tech companies. I have also been a Non-Executive Director of Bglobal plc, an AIM listed smart meter and energy services company that has now delisted having successfully returned funds to shareholders. Prior to that I was a Corporate Finance Partner at Matrix Corporate Capital, leading the team specialising in energy and clean technology, and I led the Extel number 1 rated research team in the sector.

In 2000 I joined Enron and was part of the team that implemented innovative energy supply and efficiency contracts for Sainsburys and Diageo, and in 2002 I led that team in their transition to RWE Solutions, going on to build a successful business that became part of RWE npower in 2006.

I’m active in UK energy efficiency policy development, am an experienced public speaker and have more than 150 publications on energy efficiency.  My first book, ‘Outsourcing of Energy Management’ came out in 2007 and my second book, “Energy Efficiency: the Definitive Guideto the Cheapest, Cleanest, Fastest Source of Energy”, was released in October 2013. I have been a government adviser to the Energy Efficiency Deployment Office in DECC and in November 2012 I was awarded the Energy Institute’s Individual Achievement Award.
For more information visit www.onlyelevenpercent.com/

The Soapbox slot is open to any AECB member with a message they want to get across to fellow members and to the wider sustainable building world – the AECB website has at least 30,000 people viewing it every year.   If you’ve got an important point to make, email gill@aecb.net explaining what you want to say and why. Soapboxes are around 800 words long – all you will need to supply is the words, and your picture.