News flash – the Heliomet team will be at Ecobuild. See  Solar Decathlon Europe 2012 Competition Stand S2750, near the South Gallery (where it steps)

The London Local Group has been invited by London Metropolitan University’s HelioMet team to a presentation about their submission for the Solar Decathlon Europe 2012.

This event provides a great opportunity for both the students and AECB members to have an exchange of ideas regarding the project, passivhaus and broader issues of sustainability.  There will be 3 or 4 short presentations from the students about different aspects of the scheme and then an opportunity for discussion.

The London Met is the only UK entry in this year’s competition in September in Madrid, Spain!  You can find out more information at www.heliomet.org 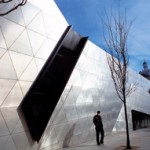 The Graduate Centre has been built on the North campus directly on the Holloway Road. The building liberates modern university architecture from its redbrick, tower block image, away from a tradition of functionality over form. The building is one of the most exciting new developments in London, and was designed by the internationally renowned architect, Daniel Libeskind, whose portfolio includes the Jewish Museum in Berlin, and the redevelopment of the World Trade centre site in New York.

We anticipate the event will prove popular so if you are interested please RSVP to debbie@aecb.net

Born in the USA in 2002, the Solar Decathlon is a competition between universities from all over the world, which have to design and build a self-sufficient house, powered only by solar energy, with the implementation of technologies that will give the house an efficient use of its resources.

The first edition of the Solar Decathlon Europe took place in Madrid in 2010. Although it features its own distinctions, this competition has its roots in the US DOE Solar Decathlon. Solar Decathlon Europe is organized by the Secretary of State for Housing and Urban Development at the Spanish Ministry of Public Works with the collaboration of Universidad Politécnica de Madrid and the support of the US Department of Energy. In addition, SDE counts with the collaboration of the Madrid City Council and Spanish Energy Saving Energy Agency IDAE, and the sponsorship of Saint-Gobain (main sponsor), Schneider Electric, Rockwool, Kömmerling and FCC.

The Solar Decathlon Europe is an international competition in which universities from all over the world meet to design, build and operate an energetically self-sufficient house, grid-connected, using solar energy as the only energy source and equipped with all of the technologies that permit maximum energy efficiency.

During the final phase of the competition each university team assembles their prototype in Madrid, where houses are open to the general public, while undergoing the ten contests of the competition, reason for which this event is called Decathlon.  1. Architecture  2. Engineering & Construction  3. Energy Efficiency  4. Electrical Energy Balance  5. Comfort Conditions  6. House Functioning  7. Communication and Social Awareness  8. Industrialization & Market Viability  9. Innovation  10. Sustainability