Gary Wilburn from HPW Architecture is running a debate session at the AECB Annual Conference in July – ‘Low Carbon in the Commercial World’.  He aims to demonstrate through live and recent project case studies how HPW Architecture are applying Low Carbon, Low Energy, highly insulated solutions to commercial and large scale projects. He looks forward to debating the subject with AECB members and discussing how we reach out to a wider and mainstream audience to adapt a fabric first approach. 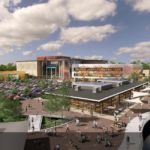 From the very first site visit, HPW Architecture have led the design and development of the masterplan for a 244 acre site at Rushden Lakes in the Nene Valley, Northamptonshire.

30 acres of the total site consisting of brownfield ground were intensively but sensitively planned to accommodate a landmark leisure, tourism and retail development.

30% of the energy used on the development will be renewably generated on site.

HPW worked closely with developers LxB to achieve the planning consent. This was an extremely complicated process because the Rushden Lakes site is partially located within a Local Wildlife Site (LWS) as well as a Site of Special Scientific Interest (SSSI), Special Protection Area (SPA) and Ramsar designated wetlands.

After many years and a dedicated effort by all parties involved, Secretary of State Eric Pickles approved the planning application in June 2014.

Marks & Spencer, House of Fraser and Primark have all signed up as anchor stores, with numerous well-known and popular high street retailers taking space in the retail terraces. 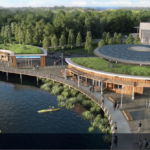 Work started in Autumn 2015 and major progress has been made on all fronts since then. In April 2016, the leisure block including a 12-screen cinema gained planning approval. With Cineworld as the anchor tenant, numerous restaurant operators have signed up and are eager to be part of Rushden Lakes.

Now, the foundations are laid and steelwork is beginning to rise. The framework of the retail terraces will start to take shape over the next few weeks and after 6 years of preparation and planning, HPW’s designs for this highly sustainable development will come into view.