Paul Buckingham argues that profit driven construction is having detrimental effects on quality and energy efficiency.

Seven years of experience with thermographic imaging and air testing on all kinds of buildings have confirmed AECB member Paul Buckingham’s depressing conclusion that almost without exception, buildings in this country are still shoddily assembled and continue failing to meet the standards set. What is worse, the prevailing ethos seems not to be ‘how well can we build?’, but ‘how quickly and cheaply can we get these boxes ticked?’ In this latest Soapbox, Paul shares some more of his horror stories, and calls for an independent enforcement regime that actually works, not the current system which helps the developers to tick all the boxes and protects the industry from the public.

It has been almost 4 years since my last submission, Soapbox – We Must Change our Disgraceful Approach to Build Quality – or Wave Goodbye to Energy Savings. Since then I have become more involved with poor building standards and energy efficiency with a number of surveys carried out on new build properties which has resulted in media coverage and face to face battles with the NHBC (National House Building Council) and one of the big “5” Star builders.

I had, foolishly, thought that, as time progressed and Building Regulations tightened up and we all became more aware of energy consumption and CO2 emissions, building standards would have improved in an attempt to meet government energy reduction targets. Sadly, and probably predictably, the opposite is true.

We now have government targets to build (throw up!) 1 million new homes by 2020 which leaves something like 600,000 houses to be built within the next 3 years! As these quantity targets are increased it is having an increasingly negative effect on build quality. Profit driven construction is also having further detrimental effects on quality and energy efficiency.

I was recently employed by one of the largest building compliance companies in the country as a compliance engineer carrying out air tightness testing on vast quantities of new build houses.

The most concerning part of the job was testing houses that failed significantly and then having to hang around while the site staff went around filling every gap and hole they could find along skirting boards, under baths and kitchen units, etc, with vast quantities of expanding foam and mastic until they could pass an air test. When you have that much air leakage with air flowing behind the plasterboard dry lining, sealing like this is actually bodging an air test to get a pass, not making the building air tight. After the test has passed most of the foam and mastic is removed because a) carpet fitters do not like fitting carpets with mastic on the skirtings, b) it doesn’t look very nice, therefore the buildings are being reverted back to their failed state! This is standard industry practice!

I was recently contacted by some very frustrated homeowners who had moved into their brand new ‘dream’ home 14 months previously and were experiencing enormous energy bills, around 4 times that suggested in their EPC. They were having major battles with their “5 Star” builder and they asked me if I could carry out a thermal imaging survey on their house to provide them with evidence. My survey resulted in a resolution meeting with the NHBC and the builder. Since then I have surveyed several other properties on the same development, below are some of my findings. 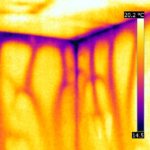 This image shows the top floor of a 3 story town house, the building was depressurised to around -45pa to pull air through the building fabric. What we see here is air flowing from the roof void and behind the dry lining because it has not been sealed to specification. The whole of the top floor displayed exactly the same as this. All the new houses I have surveyed have displayed identical air flow within the dry lining void. 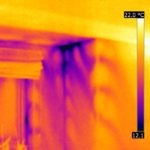 This image shows the ground floor kitchen bay window area with cold air flowing behind the dry lining, the official NHBC resolution on this is; “No solid ribbon of adhesive present at the head of bay window cheeks. Although it was apparent there was a lack of a continuous adhesive ribbon at the head of the plaster board this is not considered to be a factor in terms of heat loss at the property”.

I beg to differ on this conclusion.

During resolution meetings I have questioned the NHBC many times about why the dry lining has not been fully sealed to specification and why it has been passed by their inspectors. They have argued that it is only advisory and not a specification because it says ‘should’.

A continuous ribbon of adhesive should be applied to the perimeter of external walls, openings and services in drylined walls to prevent air infiltration.

I have also carried out comparative post occupancy air tests on these properties and in most cases the buildings are well above the original air test result. I have questioned the NHBC about this and been told that it is due to shrinkage and time and that there is nothing in the Building Regulations to suggest that the building has to maintain its air tightness beyond its initial test!

3.19 Building regulations are made for specific purposes, including securing the health, safety, welfare and convenience of people in or about buildings; furthering the conservation of fuel and power; furthering the protection or enhancement of the environment; and facilitating sustainable development.

If the building cannot maintain its air tightness beyond the day it is tested, it clearly does not facilitate sustainable development nor does it further the conservation of heat and power.

Despite all the evidence they have been presented with the NHBC deny that non sealed dry lining will in any way contribute to heat loss within a building but as yet have not offered any evidence to prove this claim. They have also told homeowners that draughts flowing from electrical sockets is purely down to natural ventilation of the building and nothing to do with heat loss.

When it comes to air tightness it appears that as long as the property can be sealed enough to meet the minimum target of 10m³/h.m², which in reality is a bit like the air tightness of a tent, the NHBC are satisfied that the building meets all its requirements. Higher than expected energy bills are of no concern because they have their pieces of paper with all the ticks in the right place so job done! 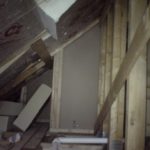 This was found in the roof void of another house, I have seen this kind of thing in many houses and flats, clearly the insulation has not been installed to manufacturers specification. Due to the positioning of the insulation the air seal line should be the inner face of the insulation so the roof void should be air tight. A post occupancy air test was carried out with the roof access panel open and produced a result of around 13.5m³/h.m² well outside the minimum requirement of 10m³/h.m² to meet building regulations.

Below are similar photos of other houses showing exactly the same kind of issues. 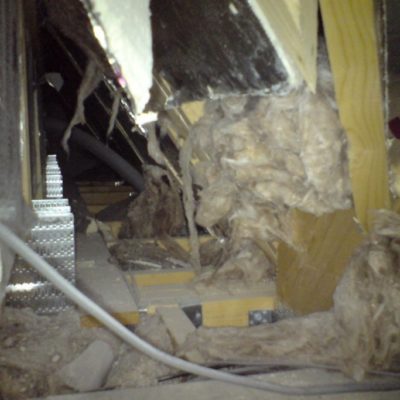 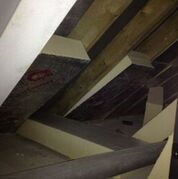 All the above does little more than scratch the surface of the extent of poor building standards within the construction industry. There is virtually no training around insulation and air tightness and through talking to many site managers and other construction staff on numerous sites, there is very little understanding of how to build an energy efficient house. Despite it being the manufactures, NHBC and developers specification/ standard, most dry liners do not know about the continuous ribbon of adhesive that should be used to seal the dry lining and the result is that it is very rarely done. I have yet to find a house that has been sealed to specification. 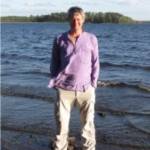 Paul worked for many years as a maintenance engineer involved with production and facilities and developed an interest in energy efficiency, renewables and the environment. In 2009 he started studying at The Centre For Alternative Technology in Wales for an MSc. For the last 7 years he has also been carrying out energy audits and thermal imaging building surveys, advising people how to reduce energy consumption and energy efficient refurbishment. Most recently he has been involved in providing evidence of poor building standards to help new homeowners win battles against developers, this has also involved several interviews with the BBC and The Guardian.

The Soapbox slot is open to any AECB member with a message they want to get across to fellow members and to the wider sustainable building world – the AECB website has at least 30,000 people viewing it every year.   If you’ve got an important point to make, follow our guidelines and submission instructions here.