The AECB water blog is posted every other month. Whether you enjoyed Blog Number 1 and have returned for more, or are a completely new reader, just dive right in (ha ha) and enjoy it.

There is still a lot of confusion amongst the general public as to how to use a solar thermal system. Therefore, whether you are specifying solar thermal for a private client, or making the decision to install it into a large number of Housing Association homes, I think it is incumbent upon you to provide clear and concise information about how to get the best out of the system. A few years ago that might have been difficult; there was little empirical data of actual monitored performance to draw on and quite a lot of conflicting advice available, much of it erroneous. But in late 2011 the Energy Saving Trust (EST) report, ‘Here comes the sun: a field trial of solar water heating systems’ provided the evidence that is needed, and deserves to be more widely read. The EST monitored 90 homes with solar thermal across the UK for a full 12 months. On average, solar provide 39% of hot water use, whilst the range was from just 9% of hot water provided to 60%. Of course this wasn’t all down to how the system was used, but it certainly played a major part. You can download the full report here. Or, if you’d just like to know a bit more about solar then this part of their website is a good beginner’s guide.

Does it make a difference when you use the solar heated water? Well No!

In 2001 Cranfield University tested eight different solar thermal systems. The research showed that there is a relatively small difference in performance between different draw-off patterns of solar heated hot water.  When the load consisted of a single 150 litre draw-off early in the evening the extrapolated annual hot water production from the tested systems ranged from 956 to 1339 kWh (3,440 to 4,820MJ). When the load was spread over the course of a day with hot water draw-offs in the morning, at lunch time, and in the evening the corresponding range was 1006 to 1350 kWh (3,620 to 4,860MJ).  A draw-off pattern that requires water early in the morning requires that some hot water is stored overnight, with corresponding losses, but because it gives lower cylinder temperatures during the day it allows the collectors to operate more effectively.

How much energy does the pump use? Not a lot

The 2001 field trial in Cranfield called the pump use ‘parasitic energy consumption’ which is a bit unfair given that pumping the heat exchange fluid around a solar thermal system actually makes it work more efficiently as gravity solar thermal systems just don’t work well in our climate. The most energy-hungry pump pulled 108 kWh (390MJ) of energy, which ranged from 8 to 11% of the energy that the solar thermal systems produced. In the 2011 EST field trails, the pump used on average just 5% of the total energy provided by the system, 55kWh a year, demonstrating just how much pumping technology for solar thermal systems has improved in the last ten years.

Does it make a difference when the back-up heating comes on?  Absolutely Yes!

Too many people are still using the boiler to heat up the hot water every day in the summer months instead of using it as a backup in the rare times that the sun cannot provide enough hot water. The chart below is monitored data from a well-designed and well-installed solar thermal system with the back-up heating (whether boiler or immersion heater) coming on at the end of the day if the solar system has not been able to reach the required design temperature.

The two diagrams below (from the EST report) clearly show what happens in a cylinder when the back-up heating comes on in the evening (Figure 10) and in the morning (Figure 11). 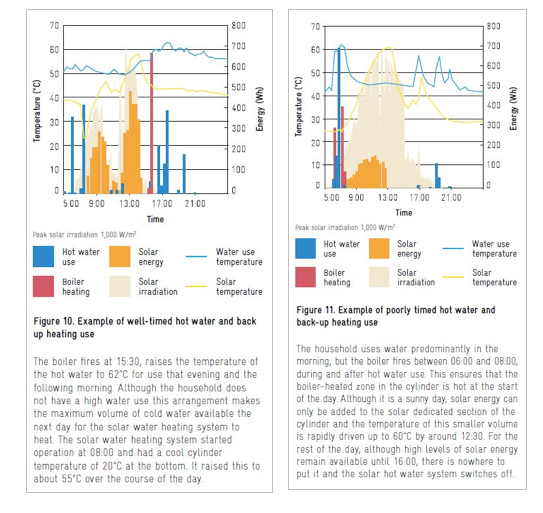 The effect is so stark, no wonder that the EST, on their website advice to consumers, state:

‘Your installer should advise you on how to set your hot water controls to get the most out of your new system, whatever time of day you use hot water.  Make sure you follow this guidance – it is the most important part of the installation.’

So, to sum up; specify a dual coil solar rated cylinder, with fast recovery back-up coil, an efficient pump set with good controls, get it installed by an MCS approved plumber, and instruct the householder as to why it is so important that the controls are set to bring the back-up heating on at 6pm in the evening. Sorted!

If you do please shout loudly! Because, although I have seen a few instances in schools (such as the one below which, although the taps say hot were actually connected to the cold water supply) and heard anecdotally of others, most wash basins will have a hot and a cold tap. The result is we are wasting huge amounts of hot water in the UK waiting for it to arrive. There are no health benefits to washing hands in hot water so why are we specifying hot taps in public toilets? Two things I think. Firstly, we have pretty much always done it, and secondly we assume that the Building Regulations require it. Well, Part G of the Building Regs (applicable in England and Wales) is complicated. I think it says cold taps only can be specified, though others disagree. But no-one yet has countered my claim that specifying hot taps in public toilets leads to the undue consumption of hot water. Read the article here and decide which side you are on. 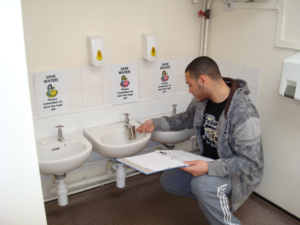 Pink is now my favourite colour but when I was growing up I hated it, because everything ‘pretty’ came in pink – yes, even then, and the last thing I was interested in was being pretty. But its ubiquitous use now in gender stereotyping is tedious in the extreme. Girls can make ace engineers, as this brilliant reworking of the Beastie Boys track ‘Girls’ demonstrates.

I often get asked this question and did answer it in writing back in June 2012, in what I modestly like to call the best showering blog in the world. But as the same question comes up often when I am delivering CPD it’s obviously a burning topic. So here goes…

In the UK for every kWh of grid electricity used in a building, 0.54kgCO2e have been produced whilst for every kWh of gas used in a building, 0.19 kgCO2e result. (Carbon Trust 2014 figures.) So far so straightforward. But then things start to get complicated, even when we assume the same amount of hot water for each shower. We have to put the gas through a boiler to heat the hot water so that starts to increase the amount of CO2 produced for every kWh of heat. A gas condensing boiler works at 90% efficiency, which means that 90% of the gas burnt is turned into useful heat, resulting in a CO2 load of 0.21 kgCO2/kWh of heat. It is 2.5 more times carbon efficient using a shower where the water has been heated by a gas condensing boiler rather than using an electric shower.

But what if you are still heating your water using a non-condensing boiler? There are some boilers out there (mostly permanent pilot ones) that are working at 60% efficiency at best, though thankfully they are few and far between. But there are a lot of D rated boilers working at 78-80% efficiency.   The CO2 emissions from a boiler at 78% efficiency are 0.24kgCO2/kWh. That is worse than a condensing boiler obviously but is still 2.3 times more carbon efficient than using an electric shower.

If you would like to read the background to the calculations in more detail, and with added jokes and random musings then check it out here. Note the figures will be slightly different as the UK Government’s calculation of CO2 intensity of gas and electricity has changed since I first wrote it.

5.     Hooray for PassivHaus with renewables

Back in 2008 at the AECB conference in Norwich I stated that a building, however well insulated still had a requirement for hot water and electricity, and that any position that said it was the envelope only that mattered was flawed. My stance was then, and still is, that we need a co-ordinated approach. Improve the building envelope, and do that as a priority, but understand that the domestic hot water and electricity load still needs to be met, and that solar thermal and PVs are the most carbon efficient way to do this. So, very pleased to hear that there is now a Passive House Plus and Passive House Premium standard for buildings that include renewables.

6.     Managing Water Use in Scarce Environments

Produced by the 2030 Water Resources Group this excellent report comprises 40 case studies of effectively managing water around the world to close the supply and demand gap. Best practice examples from agriculture and industry are combined with those at the municipal level where both technological and behaviour change solutions are featured. It is well written with the volumetric impact, capital cost and estimated unit cost of water all clearly set out. I thoroughly recommend it.

Last but not least

If you enjoyed this blog and would like to read lots of other stuff about water, some very technical and some very random, then please check out the ech2o website at www.ech2o.co.uk sign up for our quarterly water newsletter  or read Cath’s a year of showering variously blog.

If there is a water related question that you would like answered on this blog please email me at cath.hassell@ech2o.co.uk and I will do my best to cover it in a future blog.