Whether you enjoyed previous blogs and have returned for more, or are a completely new reader, welcome to AECB Water Blog 3. We hope you enjoy it.  If there is something water related that you think needs to be investigated further or explained in clearer detail, or even just bought to other people’s attention, please email me at cath.hassell@ech2o.co.uk and I will do my best to cover it.

A tale of two toilets

“It is a far far better thing I do than I have ever done” came to mind recently as I peered with great intent at the rear of three (poetic licence and all that) toilets before realising the answer was staring me in the face (literally). The toilet in the middle is one of approx 60 toilets in a large office block in London, flushed with six or four litres of water. Or rather not flushed, if by flushed we mean that the contents of the pan are conveyed out of the pan and into the stack. The office holds approx. 600 full-time staff who use (and block!) the toilets regularly, a situation that is not tenable.

ech2o were asked to provide a solution. The performance of the toilets in this building is very poor; on the ‘half flush’ some of the toilets fail to flush two bits of loo paper! Of the initial WCs that we checked, over 50% of the cisterns were failing to flush properly; the faults were varied (e.g. didn’t deliver the full 4 or 6 litres when flushed unless the control button (pneumatic type) was pressed several times or delivered the half flush when the full flush was selected because they had been installed incorrectly). We originally felt quite heartened by the cistern failures and hoped it was them, not the (non WRAS approved) pans that were causing the problem. We corrected the ones we discovered and instructed all remaining floors to be checked and rectified by in-house personnel. This improved the situation but did not cure it.

So we specified some WRAS approved pans to be trialled in the place of the originals. On removing the existing pans we realised that the profile of the replacement pans was so different that a whole glass panel would need to be replaced. Which is where this blog came in; we were actually photographing the back of the pans to look at the profiles when I realised that the pan outlet of the middle WC (installed and Italian) was much smaller than the outer two (trial replacements and British). In measurement terms it doesn’t seem that large (89 mm v 95mm ID), but it should be another step to effective flushing. If that still doesn’t rectify the situation we are considering reverting to a 6 litre single flush in some of the more problematic toilet cores as well as changing the pans.

I would like to trial floor standing pans as well but the existing pipework makes that impossible. These aren’t the only wall hung WCs I have come across that flush poorly. Is it that wall hung WC pans are inherently less efficient than floor standing WCs? Or is it that as soon as soon as you connect any WC pan to a branch discharge pipe the performance of the pan changes? If it’s the latter then surely WC pan performance tests should mirror real life rather than be performed on an unconnected pan.

Recirculating showers do exactly what they say on the tin. Most of the shower water is reused instead of running to drain, which means they could be the answer to those users who are uninterested in changing their behaviour to meet the four minute shower challenge.

So how exactly does a recirculating shower work? The CINTEP water recycling shower is the one that is most likely to hit the markets first. With this shower it is possible to have any temperature between 35OC and 45OC in recycling mode with a variable flow rate of 8-10 litres/minutes. In non-recycling mode the temperature can be anything from ambient (the temperature of the incoming cold water) to 45OC.

The diagram below shows the shower providing a flow rate of 9 litres/minute at a temperature of 42OC. Three litres of water are required to start the shower off. After that the 9 litres is made up of 2.7 litres from the cold supply and 6.3 litres recycled greywater from the shower. The used shower water is cleaned and heated before it is mixed with the incoming cold water. Cleaning is via a series of filters and a subsequent heating of the water to pasteurise it. The main filter is a hydrocyclone, which classifies, separates and sorts particles in liquid suspension based on the ratio of their centripetal force due to fluid resistance. (No I didn’t quite follow that either but basically it’s a very efficient filter.) Although the recycled water has to be heated to 73OC to ensure complete pasteurisation, it goes into the pasteurisation unit at 55OC. This is after exiting the shower tray at 37OC. A heat exchanger lowers the exit water from the pasteurisation unit from 72OC to 54OC whilst heating the incoming used shower water from 36OC to 55OC. That recycled water now heads to the shower mixer at 54OC, mixes with cold water at 15OC and leaves the shower head at 42OC.

So, for every one litre of water at the showerhead, just 0.3 litres of water is required from the mains and instead of 162 kilojoules to heat that 1 litre of water in a conventional electric shower the CINTEP shower only needs 50 kilojoules. Certainly an option to consider. And, if you’d like to read what happened when I was offered a go in one of these showers check out my ‘A year of showering variously’ blog. 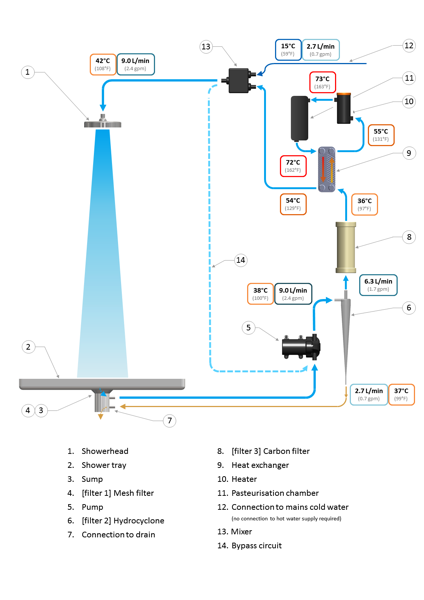 The Water Efficiency Network (WATEF) hosted an excellent virtual masterclass on global trends in water efficiency back in June. There were speakers from Taiwan, Australia, USA and UK. Always interesting to hear from other countries as to their strategies to meet the supply/demand mismatch, an issue that is becoming more severe as populations increase and global warming causes more shortfall in accessible water supplies. There were some excellent graphics – this one of the expected replacement of single flush toilets by dual flush in Australia being my favourite. 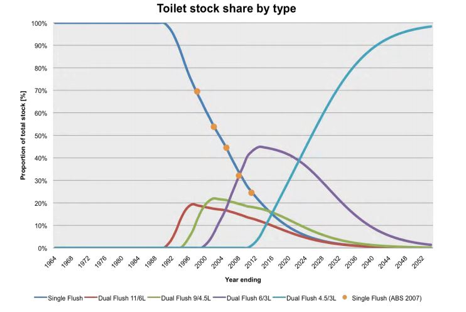 All the PowerPoint presentations from the masterclass can be accessed here

Tap standardisation – how important is it?

Taps, stopcocks etc. have historically turned off clockwise, certainly in the UK. That brings a certain amount of learned behaviour so that turning a tap on and off becomes a task that is done without thinking. But that has changed with ceramic cartridge technology (or quarter turn taps) where the current convention is that the cold tap still turns off clockwise but the hot tap turns off anti clockwise. So, is this a problem? David Whitaker thinks that it is and that this change is leading people to leave taps on by mistake. I am less sure.  It is strange when you meet one of these taps (we have one on our canal boat) and I always try to turn ours off the wrong way (i.e. clockwise) before realising I can’t and so turn it the other way. Because quarter turn taps turn on and off so quickly I don’t think there is a much greater chance for them to be left on than other types of taps. David’s point about a stuck tap then being forced the wrong way and thus get damaged has more truck to it, but I still think the speed of the quarter turn on/off is the key here. But it’s one to ponder on a (as I write) hot sticky summer afternoon…

The Floods – a briefing for designers

I thoroughly enjoyed the most recent AECB conference and was pleased to be given a slot to address all the delegates. With just 20 minutes to cover everything about designing for flood resilience it is by necessity a broad brush overview, and some of the slides make little sense without the accompanying jokes, but hopefully you will find it interesting. A PDF of the slides, and all the other workshop presentations can be found here.

For those of you who appreciate artistry in all its forms, check out this link showing how to weld a lead upstand. The first 30 seconds is a bit prosaic but after that its poetry in motion! If you don’t agree then there is something seriously wrong with you…

Hot water cylinders to be rated like fridges and freezers

Under the Energy labelling Directive all water heating products of up to 2,000 litres sold in the EU will need to meet minimum energy performance criteria, and those up to 500 litres will require an energy label ranging from A to G. Although not due until September 2015 it will be interesting to see if manufacturers will start to label their products sooner than that. It will certainly help architects, plumbers etc. quickly and easily know which cylinders etc. to spec and is to be welcomed.

Last but not least

If you enjoyed this blog and would like to read lots of other stuff about water, some very technical and some very random, then please check out the ech2o website at www.ech2o.co.uk sign up for our quarterly newsletter  or read Cath’s a year of showering variously blog  .