Welcome to AECB Water Blog 4. We hope you enjoy it.  If there is something water related that you think needs to be investigated further or explained in clearer detail, or even just bought to other people’s attention, please email me at cath.hassell@ech2o.co.uk and I will do my best to cover it.

Google ‘social norms and toilet use’ and virtually all the links are about sanitation in developing countries. Many refer to normalising the use of inside toilets as opposed to open defecation. Others are about the misuse of compost toilets, when users add water to ‘flush’ them. But actually we are just as stuck about social norms in the West – witness the difficulty most of us have if presented with anything other than the usual when using the toilet.

If you have been brought up in the UK you are pretty much used to a white porcelain bowl (unless you are unlikely enough to have a 70’s toilet when it could be orange, turquoise, avocado) with some water at the bottom. And therefore when confronted with a compost toilet, or a squat toilet or a ledge toilet, everything is different and weird and therefore somehow wrong! 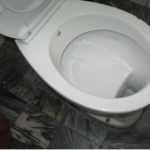 I am fascinated by toilets (probably more so than the average user), think squat toilets are great, and like compost toilets (preferably if I can’t see the poo of the previous person), but even I find the ledge toilet quite a challenge. Now, when I say ledge toilet I mean ledge toilets as found in Germany. As opposed to UK ledge toilets which are wall hung pans with concealed cisterns with a little bit of ledge between the seat and the wall. (Who knew that design even had an official name?). In a German ledge toilet there is a large flat ledge at the back of the toilet, where the poo sits until you flush. The loos are designed like this so that users can examine their poo for any health problems. An admirable purpose but doesn’t appeal to the majority of Brits that I have asked. An architect friend of mine specified one once for a UK client. He liked the lines of the toilet. Didn’t bother to look inside. Ordered it especially from Germany. It arrived. Client was out. Plumber installed it. Not a happy client!

My German focus group (aka a few lucky German and Austrian friends) used ledge toilets when they were growing up (though that did seem to be in older houses or at school) but only one was brought up to actually examine their own poo. And none of them particularly waxed lyrical about the experience, or bemoaned the fact now they live in the UK ledge toilets are a thing of the past. One did say it took her ages to get used to the splash of the poo hitting the water when she moved to London, and another commented “what was most annoying was the constant clogging up of the loos; I cannot remember this annoyance from continental Europe”. (Though that isn’t because of the lack a ledge in UK toilets, and is something I may well revisit.) 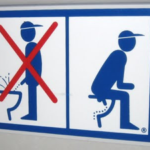 The other challenging thing about ledge toilets is the ‘Sitzpinkel Rule’ – basically the rule that men must sit down to wee. Surely that is a challenge too far for most men? A quick check among the men in the office (all two of them at the time) was that they wouldn’t mind – very commendable and quite surprising. My family focus group on the other hand (seven in total) seem to represent the average British man more closely. No sitting down among them unless completely drunk, with the occasional nod to ‘will sit down if weeing in the dark.’ So how do German men cope? Back to the focus group to check up. The best comment was as follows about a partner and their 6 year old son. “At home both are well trained and sit down even for a pee. In public toilets I leave it up to their judgement so I suspect they always stand!” Given that this family now live in the UK and so home doesn’t have a ledge toilet that is admirably trained indeed!

Should I shower before I swim?

Which is more detrimental to the environment – the chlorine required to clean the swimming pool if I swim in it without showering v the impact of the hot water for a pre-dip shower? Swimming pools are disinfected to prevent the build-up of bacteria that could prove harmful to health, and most public swimming pools in the UK use chlorine to disinfect the water, delivered via an automatic dosing system. A decision not to shower will have a direct impact (however small that may be) on how much chlorine is added, as you will be dirtier if you haven’t showered.

The chlorine reacts with water to form various chemicals, most notably hypochlorous acid, which kills the bacteria and other pathogens. But it’s not quite as simple as this. Chlorine is required in its ‘free’ state, to be available to oxidise organic substances and thus disinfect the pool water. The fewer foreign substances introduced into the water, the more free chlorine residual that is available. As sweat on our bodies reacts with chlorine in the water, the chlorine changes its state to combined (or “used”) chlorine and is no longer available for disinfection. Pools are constantly being monitored to check both the levels of used and residual chlorine. If there is too little free chlorine more needs to be added. That’s quite straightforward to control. What’s more difficult is the amount of combined chlorine residual. If this becomes too high (over 0.5ppm) then the pool has to be superchlorinated (which requires a lot of chemicals and the closure of the pool).

Chlorine combined with ammonia (present in both sweat and urine) produces chloramines which cause eye irritation and an objectionable chlorine odour. So, when chlorine can be smelt around a pool it is not that there is too much chlorine in the pool, but too much combined chlorine and more chlorine must be added to increase the free chlorine level.
The question was which is better for the environment, so let’s add some figures here. Of course CO2 emissions are not the only environmental impact of producing chlorine, but they are the easiest to measure. Chlorine is produced through electrolysis of a salt-solution, a highly energy intensive process, requiring an electricity consumption of 4,380 kWh/tonne chlorine (4.4kWh/kg chlorine). Assuming the chlorine was produced in the UK, where the carbon load of grid generated electricity is 0.52kgCO2/kW, every kg of chlorine contains 2.3kgCO2
A two minute hot shower requires 0.47kWh of gas. Assuming a gas condensing boiler, the shower produces 0.01 kg (10 grammes) CO2. So, one kg of chlorine in CO2 terms equates to 239 two minute showers. What I really need to know is how many grammes of chlorine are used up in reacting to the sweat on an average body. That proved a question too far, but my gut instinct is that more than 1kg of chlorine would be required to treat the sweat on 239 bodies. So, yes, I should shower before I swim.
PS I used to think that weeing in a swimming pool was probably ok because “the water is chlorinated anyway”. Now I realise it’s a really bad idea!

Solar thermal for a boat

Got an interesting call earlier this week. Client lives on a large boat. Spends four months of the year (the winter) in Greece. Has electric underfloor heating for when she is out of the UK. (Sounds awful but it’s on a frost stat so only comes on if the temperature in the boat falls below 8 degrees C). Is connected to mains electric and mains water. Wanted to look at renewable options. So, an efficient wood stove and solar thermal were the obvious solutions. The beauty about solar thermal as a solution was that as it would only be required during the warmer months then a gravity solar thermal system (as used in Greece, Turkey, Australia, India etc.) would be perfect. Ten, fifteen years ago these systems were quite easy to find. So much so that I often had to explain to clients that they weren’t suitable for all round use in the UK. This time, a 20 minute Google search and I still hadn’t found one!

One of the CPDs I most enjoy delivering is the infamous “Plumbing for architects.” I get asked a lot of supplementary questions both at the end of the event and afterwards in emails. As there is obviously such an appetite from architects for straightforward answers to simple plumbing questions I thought I would start answering some in this blog. Note I have said straightforward answers. As I began to write the answers to these question I realised I was getting further and further into the detail, which wasn’t the idea at all. So, with a reminder that these are simple answers and all situations are different, here goes.

I presume the combi boiler is a more efficient method of heating hot water and heating the building than the system boiler.  Is this correct?

A combi boiler heats the water instantaneously. A system boiler requires a store of water. There are conflicting views as to which way is best with regard to efficiencies. As a combi boiler heats the water directly there are no heat losses from the stored hot water. But it can also be argued that as modern cylinders are well insulated and will be in the bathroom next to the main hot water using appliances, dead legs are shorter and this set up is more efficient. So six of one and half a dozen of the other. What is more important is where the combi boiler or boiler and cylinder is sited. You should always ensure that the boiler is sited as close to the cylinder or hot water draw off points as possible. And the cylinder, should be sited close to both the boiler as well as hot water draw off points. In terms of heating water for a space heating system they are both as efficient as each other as neither require the dreaded f and e cistern.

I live and work in the country, and I usually have to revert to oil.  Can you get efficient oil fired combi boilers?

Yes you can get condensing combi oil boilers, e.g. the Greenstar Heatslave from Worcester Bosch

I wanted to know more about good showers that are reasonably efficient, (probably not such a thing?).   Are there more efficient shower heads for distributing the water?

Shower heads. For dwellings I specify shower heads at a maximum 8 litres minute. Always remember it’s not just pressure, its flow as well. If you are coming off the mains (e.g. from an unvented cylinder or through a combi) you will get good pressure (usually) and a flow rate of 8 litres/minute is more than adequate. Electric showers are ‘efficient’ as they deliver 5 litres/minute flow rate at best. But I wouldn’t call them ‘good’. Back in May 2012 I blogged about pressure and flow for showers in more detail. And in June 2014 I expressed my frustration with architects specifying electric showers and the technical reasons why it is so often a poor solution.

And finally… architects or engineers – where do you stand?

Not really to do with water but never mind… Watch this brilliant rendition of the above dichotomy between these noble two professions, brought to you by the fabulous Smack the Pony team.

If you enjoyed this blog and would like to read lots of other stuff about water, some very technical and some very random, then please check out the ech2o website at www.ech2o.co.uk sign up for our quarterly newsletter  or read Cath’s a year of showering variously blog  .