This is a new blog that will be coming out every two months. It will evolve as time passes so if you don’t cope with change well probably best not to start reading it… My current plan is that it will be a technical blog with three or four water related topics each time. Hopefully you will enjoy reading it as much as I will enjoy writing it. And if you do think of anything in particular that you’d like me to blog about then please email me at cath.hassell@ech2o.co.uk

We need to talk about flooding

Whilst not hot off the press (indeed quite lukewarm) It would be remiss of me to start this first blog without mentioning the flooding and storms in the UK that dominated the media through Dec, Jan and Feb. Rather than knee jerk reactions from politicians and the vilification (unfair in my view) of the Environment Agency, let’s look at some considered reporting about those events. Judith Thornton has written Floods – causes, future risks and mitigation an excellent article that covers what it says on the tin.  It’s in the spring 2014 volume of Green Building Magazine (free for AECB members) or you can download it here  And CIWEM have produced Floods and dredging – a reality check . It explains why dredging is not the magic bullet to reduce flooding despite what you may have read in the popular press. 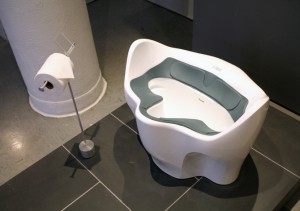 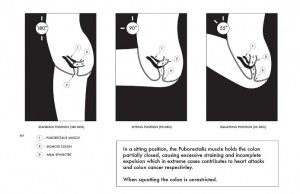 I love this toilet! (I also love the most recent WC siphon from McAlpine, just to give you an insight into my wide ranging tastes. And plain crisps.) I got to actually sit on one (though not to use it as not plumbed in) on World Toilet day back in November. Very comfortable. Tips you back subtly thus lowering your bottom beneath your legs.

It’s a well-known medical fact that squatting is a better way of defecating than sitting as research has shown that this means that the colon is wide open and so faecal matter is dispelled far more efficiently. As a result, in cultures where squatting is the norm there are less incidences of cancer of the colon.[1]

Peter Codling, a designer, wanted to design a toilet that allowed the user to sit whilst at the same time replicating the squatting position to open the colon as shown. Le Penseur is the result and it’s such a superb design I hope it will be coming to a store near me/you soon. Read his whole process from idea, through to design concept through to finished product here.

The Renewable Heat Incentive (RHI) – a kickstart for solar thermal?

So the domestic RHI is finally here (or almost depending on when you are reading this and any last minute delaying tactics by the Govt). It will apply to heat pumps (ground source, air source and water source), biomass boilers and solar thermal systems. They can all, obviously, provide hot water but as solar thermal is for hot water only and will be battling for roof space along with PVs I thought I would cover it first.

In 2010 the Guardian estimated that there were 100,000 domestic systems installed in the UK.[2] I wondered by how much that figure had increased over the last three years of PV mania and almost complete solar thermal inertia. So I asked Dominic Skeaping of London Solar, AECB member and my go-to-guy on anything solar related. He answered courtesy of a brilliant two page email  with all the calculations and assumptions detailed (click below to download). The gist of it is that the European Solar Thermal Industry Federation listed the UK’s total installed collector area at the end of 2012 as 709,673m2 and a total installed capacity of 496,771kWth. Dominic uses that base data to estimate that there are currently 176,000 systems installed of which ‘anywhere between 140,000 to 150,000 are working’.

The RHI for domestic solar thermal has been set at 19.2p/kWh of heat produced and will be paid for seven years’ worth of thermal heat. All systems installed since 15th July 2009 will be eligible. The amount of heat produced will be deemed at the time of installation, rather than metered. In effect that makes it a grant but paid over seven years instead of up front. The deemed thermal heat produced will be calculated depending on a variety of factors, including panel and cylinder size, roof orientation, occupancy, position in the UK and amount of overshading. The deeming method is based on MIS 3001 draft consultation 2012, plus SAP 2012 Appendix H. SAP calculates that if you have an A rated condensing boiler any CO2 that is offset is from a boiler working at 91%. But actually new research has shown that condensing boilers are operating at only 70% when heating hot water. So the deeming calculator is far more optimistic (or realistic) than SAP with regards to how much fossil fuel a solar thermal system will actually offset.

A ‘typical’ system costs between £4,000 – £5,000 currently to install. So, will the RHI payments (as detailed in Table 1) be sufficient to drive forward the installation of thousands of units across the UK?  Let’s take the case of the 4 bed house (classified as 5 occupants) which will pay back approximately £3,000 via the RHI. An upfront cost will be required near the top end of the scale so let’s say £5,000 system cost. Let’s also assume the family are high hot water users and get 2,000 kWh worth of hot water from their solar thermal panels a year. That is unlikely to directly affect how much RHI they get, but it will affect the extra fuel savings.

The RHI will pay just under £430 a year. If they use a gas boiler then savings on fuel bills (at 4p/kWh) will be a further £80. So at the end of seven years £3,570 will have been paid back. A well installed and well maintained solar thermal system should last 15-20 years so will go on saving fuel bills after the RHI payments have stopped but we have another £1,430 to be covered from fuel savings alone. Even if we say that fuel prices have increased by 50% by then and so savings are £120 a year, it will still take a further twelve years to pay back, leading to a 19 year payback period. And we still haven’t taken into account any maintenance costs. Nor efficient hot water users!

So, will it be enough of an incentive to get massive take up?  Dominic is not convinced that the RHI will be that successful. Nor I am having just crunched these numbers. It’s certainly not going to get the money pages in the weekend papers salivating on a better use of your money than investing in armaments or tobacco. I would have much preferred a higher incentive payment per kWh but paid on metered performance only. In a worst case scenario, a system could be installed, never work properly and still get the full RHI payment.

Short showers and solar thermal – a tautology in terms?

I will still encourage clients to install either solar thermal or PVs (or both) on their roofs but the CO2 savings and payback figures work better for PVs in most of my projects. One of the problems with solar thermal is that the more hot water you use the better in a way. Have a five minute shower to do your bit for the environment and you will be up to a 30 year payback period.   I have a very good friend who despaired of ever breaking even with his system since he was only getting 750 kWh of heat energy a year from it despite 250 litres of storage and 30 evacuated tubes.  And then they had a baby girl and Paul is made up and just waiting for when she hits thirteen and starts to spend an hour every day in the shower when finally the solar thermal system will come into its own!

The Sustainable Water Industry Group doesn’t need a strap line and will never have to have tortured AGMs about whether it should change its name. But that’s not the only thing that’s good about it. Consisting of varied interests to do with all things water from water companies to landscape architects and everything in between SWIG has a strong emphasis towards greening our urban environment. It host five or so top quality talks a year. Usually free, occasionally £25, always annoyingly in the middle of the day, the talks are informative, delivered by people who are extremely knowledgeable about their specialism and with lots of pretty pictures (unless it’s me talking about urinals). The organisation also hosts the fabulous SWIG awards. Recent talks have covered SuDS, efficient irrigation, green roofs and green walls, engaging with school pupils and rain gardens. The next one will be on greening the city focussing on community projects. The only downfall? They only ever happen within London (or very close to it). If you want to hear about future events then email info@sustainablewater.org.uk

If you enjoyed this blog and would like to read lots of other stuff about water, some very technical and some very random, then please check out the ech2o website at www.ech2o.co.uk sign up for our quarterly newsletter  or read Cath’s A year of showering variously blog

[1] The lower rates of colonic cancer are also thought to be due to different diets as well. [2] http://www.theguardian.com/money/2010/feb/20/solar-water-heating-incentives.